This post is about a 2D NACA 0010 aerofoil undergoing various forms of forced kinematics i.e. pure heaving and pitching and a combination of two known as flapping.
Heaving motion is achieved by changing the angle of attack on the aerofoil based on the Eqn. 1.
αe = arctan[2*π*Sta*cos(2*π*fh*t)] + αi               Eqn. 1
The pitching motion is achieved by employing the sliding mesh with the rotational velocity governed by Eqn. 2.
ω = 2*π*fh*ϑ*cos(2*π*fh*t)                                 Eqn. 2
w.r.t. Eqn. 1-2 αe is the effective angle of attack, Sta is Strouhal number (defined as (fh*h0/U∞)), fh is the frequency of oscillations, while ω, t and ϑ represent rotational velocity, instantaneous time and pitching angle. h0 is the heaving amplitude and U∞ is the free stream velocity.
The flapping motion is achieved by a combination of the heaving and pitching. In this particular simulation, the aerofoil is in the power extraction mode, meaning the feathering parameter χ is greater in magnitude than 1.0. Feathering parameter is defined by Eqn. 3.
χ = ϑ/arctan(h0*2*π*fh/U∞)                                  Eqn. 3
The boundary conditions employed for the set of simulations are at Re 50,000, Sta 0.0149, h0 = aerofoil chord length, χ = 1.1 and fh = 0.5 Hz. The animation of the velocity contours superimposed with streamlines is shown in Fig. 1. The velocity scale ranges from 0 to 7 m/s. Pressure distribution (shall be added later) around the aerofoils in various forms of motion, after five complete cycles is shown in Fig. 2.
Fig. 1, Flow animation, fluid flow direction is from left to right
If you want to collaborate on the research projects related to turbomachinery, aerodynamics, renewable energy, please reach out. Thank you very much for reading.
Posted by fadoobaba on Wednesday, July 15, 2020 No comments:

This post is about a 2D NACA 0012 heaving aerofoil. Heaving motion is achieved by changing the angle of attack on the aerofoil based on the Eqn. 1.
αe = arctan[2*π*Sta*cos(2*π*fh*t)]+ αi               Eqn. 1
w.r.t. Eqn. 1, αe is the effective angle of attack, Sta is Strouhal number, fh is the heaving frequency.
The case S1 and H6 from [1] are compared in the animations below.
If you want to collaborate on the research projects related to turbomachinery, aerodynamics, renewable energy, please reach out. Thank you very much for reading.

This is a post about computational fluid dynamics analysis of formation flight.

The results from an analysis of three unmanned combat aerial vehicles (UCAVs) flying in a V-type formation are presented. The chosen UCAV configuration, shown in Figs. 1-2 and available for download here, is named SACCON (Stability And Control Configuration) UCAV. This configuration is used because of the availability of the geometric and aerodynamic data, used in the validation and verification of the numerical analysis. The SACCON UCAV is designed by NATO's (North Atlantic Treaty Organization) RTO (Research and Technology Group) under Applied Vehicle Task Group (AVT-161) to assess the performance of military aircrafts. 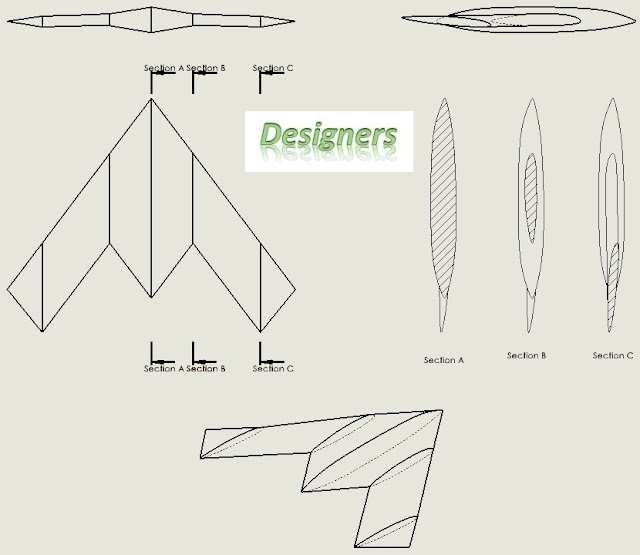 The simulation is performed using commercially available computational fluid dynamics code.  The details about the solver and the discretization schemes are presented next. The simulation is performed using SIMPLE-R solver for pressure-velocity coupling. The diffusive terms of the Navier-Stokes equations are discretized using central differentiating scheme while the convective terms are discretized using the upwind scheme of second order. The κ-ε turbulence model with damping functions is implemented to model turbulence. The simulation predicts three-dimensional steady–state flow over UCAVs. 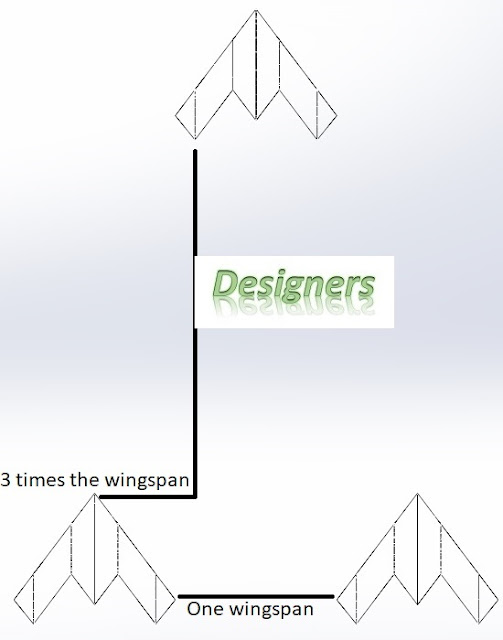 The boundaries of the computational domain are located at a distance equivalent to 10 times the distance between the nose of the leading UCAV and the tail of the trailing UCAV. The mesh is made of 821,315 cells. Mesh controls are used to refine the mesh in the areas of interest i.e. on the surfaces of the UCAVs and in the wake of all three UCAVs. A cartesian mesh with immersed boundary method is used for the present study. The computational domain with mesh is shown in Fig. 4 while a closeup of the mesh is shown in Fig. 5. 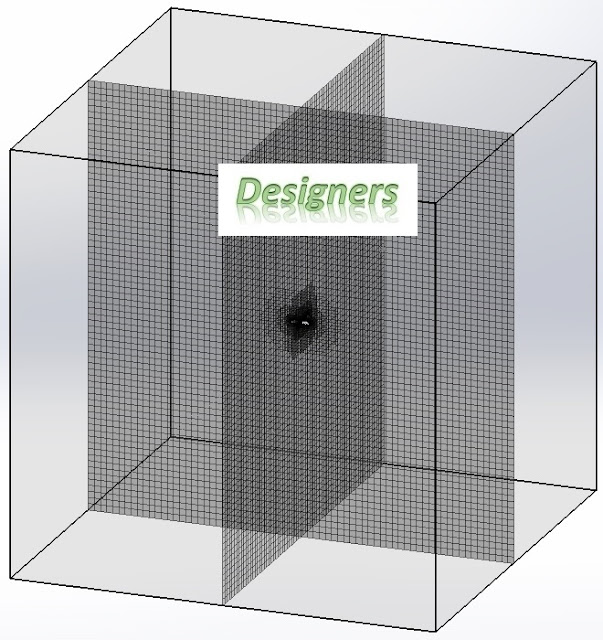 Fig. 4, The computational domain and mesh 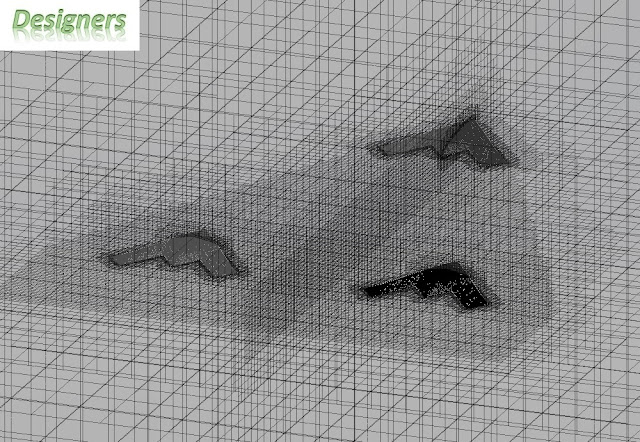 Fig. 5, Closeup of mesh, notice the refined wakes of the UCAVs

Fig. 6, Flight direction towards the reader 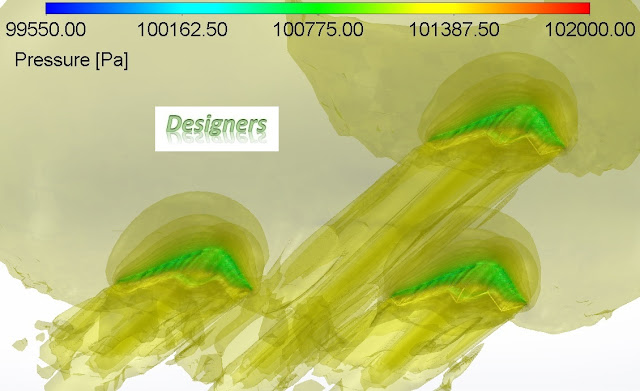 Fig. 7, Flight direction away from the reader

Thank you very much for reading. If you would like to collaborate on research projects, please reach out.

This post is about the simulation of hypersonic flow over a heated circular cylinder, in two dimensions.

Equation 1 is used as a relationship between Mach and the Reynold number. 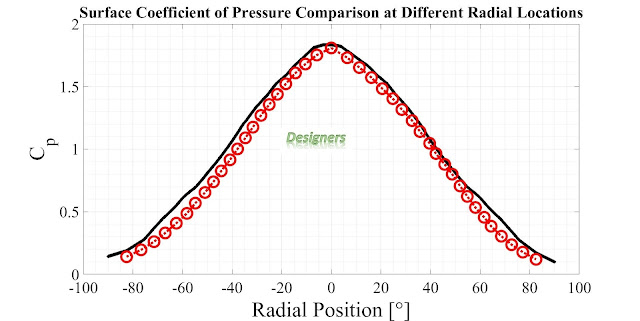 Fig. 1 A comparison with previous research [1]. 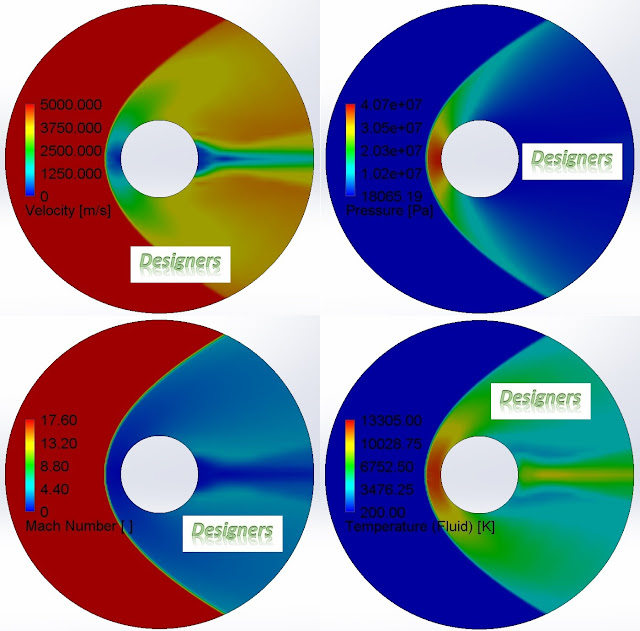 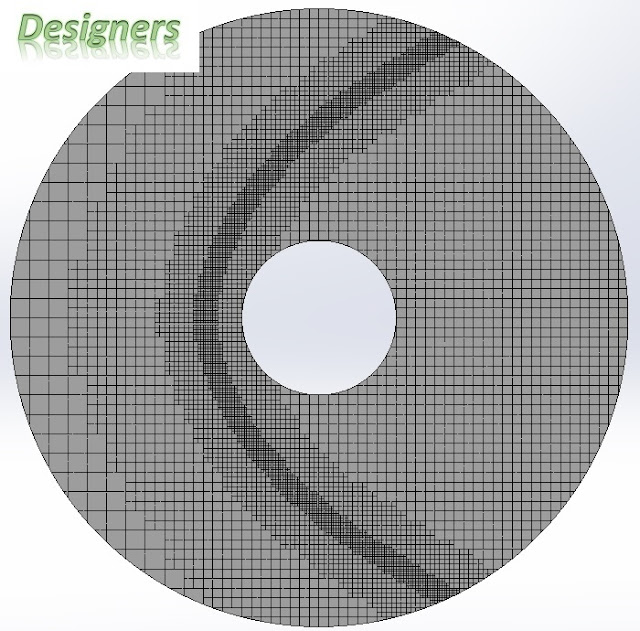 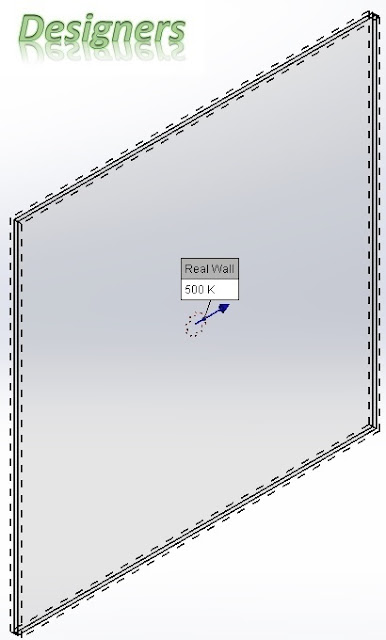 Thank you for reading. If you would like to collaborate on research projects, please reach out. I am looking for a PhD position, any guidance would be appreciated.
Posted by fadoobaba on Sunday, March 22, 2020 No comments:

This post is about a transient simulation of the ONERA M-6 flying-wing aircraft with a cross-section of ONERA D airfoil, as shown in Fig. 1. 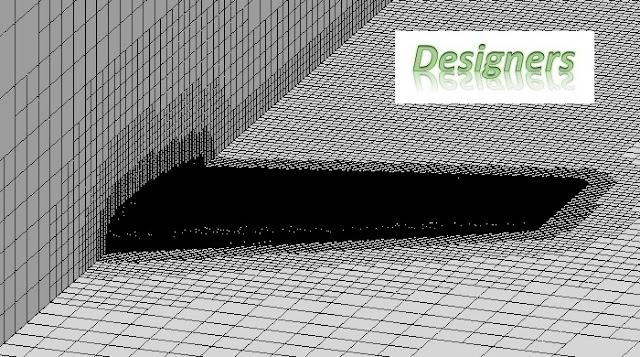 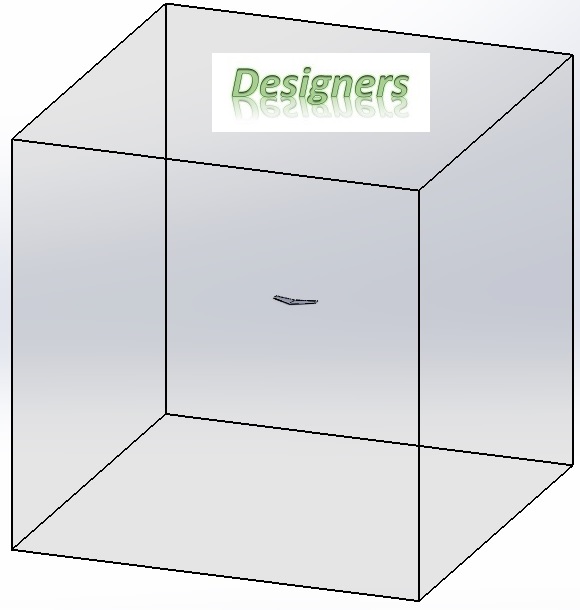 The results of lift and drag force from the present simulation are within 4.35% and 4.2% of the results calculated by NASA [4] and [1-3]. Streamlines and pressure surface plot around the aircraft surface are shown in Fig. 4.

Thank you for reading. If you would like to collaborate on research projects, please reach out.
Posted by fadoobaba on Sunday, November 17, 2019 No comments:

This post is about the computational fluid dynamics analysis of a small drone. The drone features a blended body-wing design with various cross sections at different span-wise locations. The drone has a wing-span and length of 6 ft. and 4.92 ft., respectively. The root (center) portion of the drone is relatively thicker and symmetrical in cross section for increased mechanical strength while the the mid-section and wing tips are thinner and utilize more cambered aero-foils. This is purely a concept design and as of now, no physical model of this drone exists.

The numerical simulations for the present study were carried out using SolidWorks Flow Simulation Premium© code. The code employs κ-ε model with Two-Scales Wall Functions approach as the turbulence model. The numerical algorithm implemented is the SIMPLE-R, modified. The second-order upwind discretization scheme is used to approximate the convective fluxes while the diffusive terms are approximated using the central differencing scheme. The time derivatives are approximated with an implicit first order Euler scheme. The SolidWorks Flow Simulation© solves the Navier-Stokes equations, equations 1-3, which are formulations of mass, momentum and energy conservation laws for fluid flows. Turbulent flows are predicted using the Favre-averaged Navier-Stokes equations. 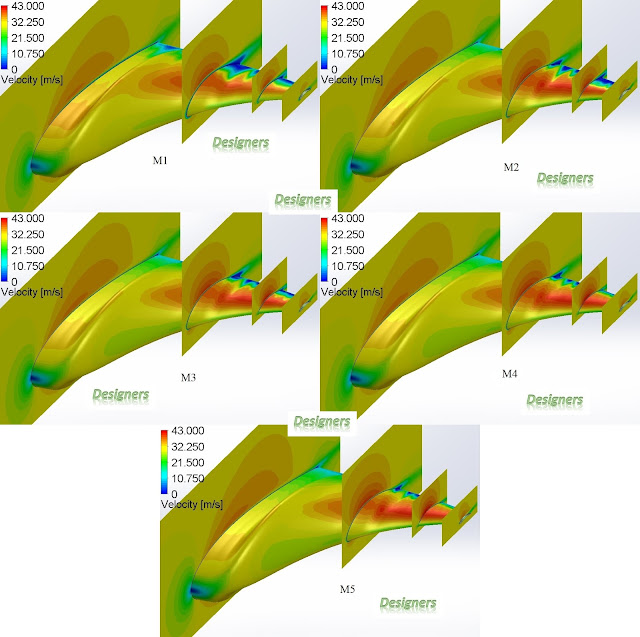 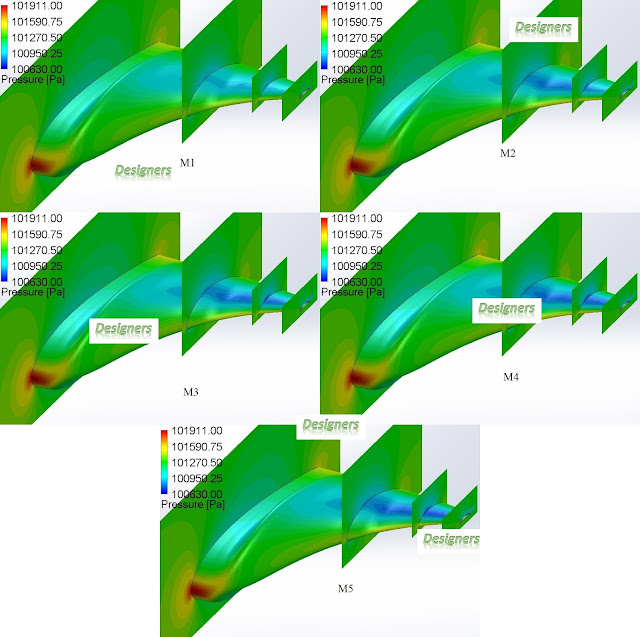 Aero-acoustics around the drone were also examined, as shown Fig. 3. 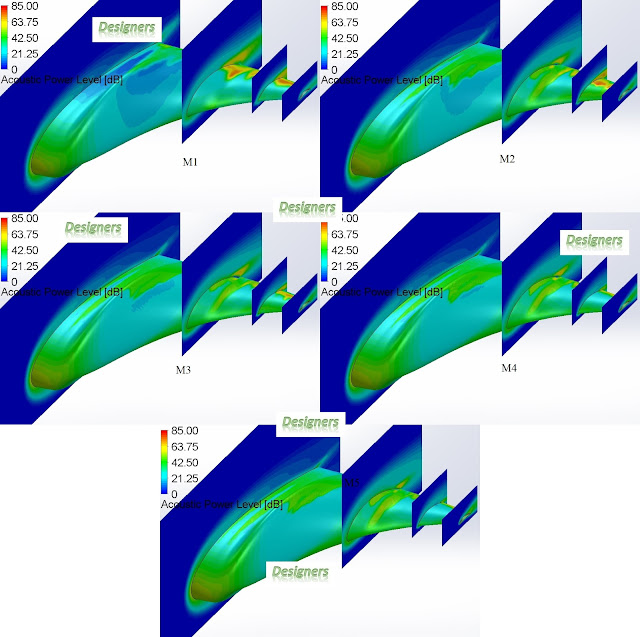 A zoomed in view of the computational mesh is shown in Fig. 4. The refined mesh at the drone walls as a result of the mesh controls employed is clearly visible. The hump near the root of the drone is also visible, it was added in order to prevent the span-wise flow. 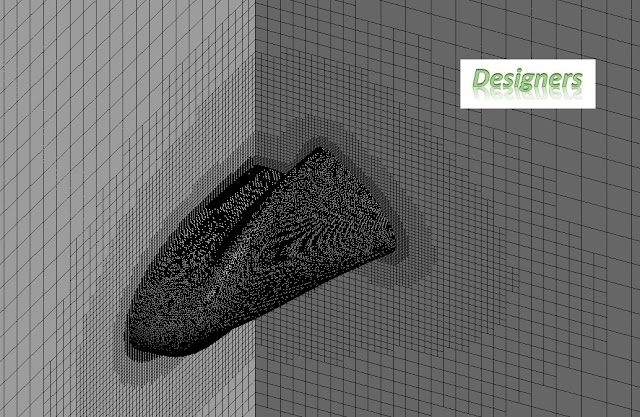 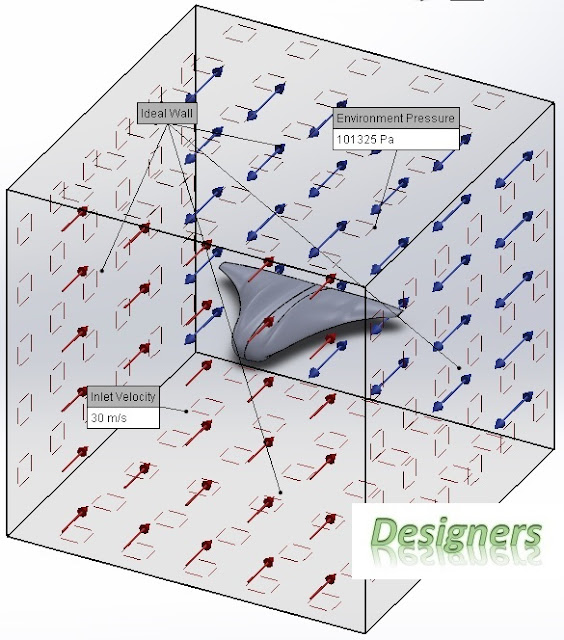 An animation of an aileron roll can be seen here.

Thank you for reading. If you would like to collaborate on research projects, please reach out.

Posted by fadoobaba on Thursday, March 14, 2019 No comments:

This post is about the CFD analysis of a projectile projected in the horizontal orientation at an ambient mach number of 4.0.

The projectile had dimensions as given in [1]. SolidWorks Flow Simulation Premium software was employed for the simulation. There were three different meshes each being about eight times finer at the boundary and surroundings. Fig. 1 shows mach number profiles around the projectile. The co-efficient of drag and lift is also mentioned. The number of partial (cells at the solid fluid boundary) and the total mesh cells are also mentioned.

Various meshes around the projectile is shown in Fig. 2.

Fig. 2 Mesh around the projectile.

To better capture the shock waves and the wake, the mesh was refined in the areas of interest (starting with the base coarse mesh shown in Fig. 1-2), as shown in Fig. 3. 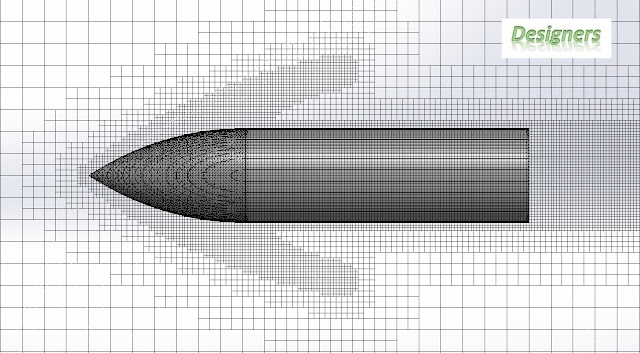 The velocity contours are shown in Fig. 4. The results were within 3.83% of experimental results [1]. 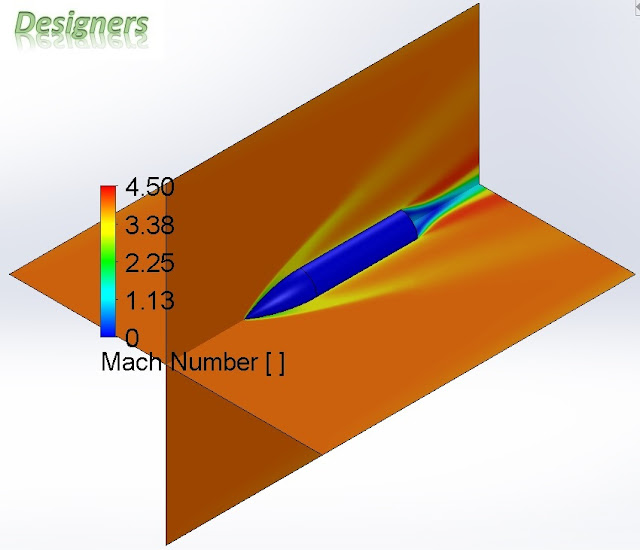 Thank you for reading, If you would like to collaborate on projects, please reach out.